Excavation Definition: In its simplest terms, excavation generally means work involving the removal of soil or rock from a building site or area within a site to form an open face, hole or cavity using tools, or machinery. OSHA defines it "as any man-made cut, cavity, trench, or depression in the earth's surface formed by earth removal." 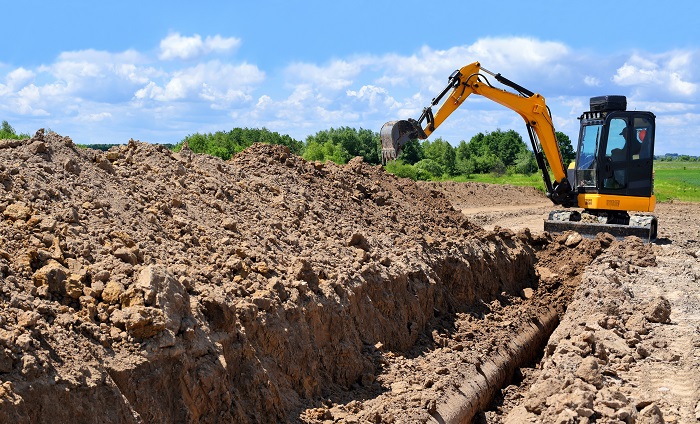 Most excavation work is done by heavy machinery.  Although other equipment can be used, digging typically involves a backhoe, loader, dozer or an excavator.  A backhoe has both a rear-mounted digging bucket on a two-part hinged arm and a front shovel-bucket. It is often the only machinery used on small to medium projects. A dozer has tracks with a front blade and sometimes a ripper on the back. An excavator has a bucket, boom and a cab mounted on a rotating platform that sits on tracks like a tank, or it has wheels.  Excavators are also known as diggers or sometimes trackhoes.

Most Common Types of Excavation in Residential Construction

Prior to the cut and fill, one would usually clear the area of vegetation and strip and stockpile the topsoil off the building pad area. In the video below, the equipment operator on the skid-steer is cutting and filling the building pad.

This type of excavation is where the length of the excavated area exceeds the depth. It is a narrow underground trench that is between 4 inches and several feet wide. Trench excavation is typically used to bury utility lines, including water, sewer and gas services.  It also includes trenching for power, phone and cable.

Rock excavation is highly challenging as compared to other types. This is because it cannot be done without the use of special heavy equipment. The video clip below shows a contractor using a rock breaker attachment in the trench.  Sometimes, this is the best and most effective method to use.

The excavator in the video below prepares a sub-surface area for installation of the house footings. These are always excavated to an elevation lower than the frost line.  These excavations are usually between 18 inches deep and several feet deep as shown in this video.  This protects the home foundation from expansion and contraction (heaving) due to frost. This is also done utilizing a laser and a grade checker to keep the excavation level for the footings.

A basement is the part of the building below ground level. Basements can be  completely below grade, or in the example of a daylight basement, it would be at ground level on one side and at surface level on one side. Excavation for basements is usually performed by a heavy equipment machine called an excavator or track loader. The excavation is larger than the final building and will have to be back-filled after the concrete walls are built.

The excavation definition outlined above only covers the most common processes in residential construction.